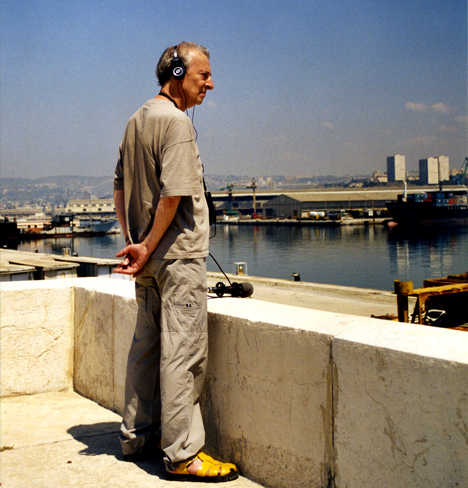 What about this first sentence; first 1929. He wrote several autobiographies, with falsified data. Writing drives him mad, you never should ask him about that. And whereas he didn’t dare to make himself younger, he made himself older. So there is a lot of false data going around, which he enjoyed before. Now he doesn’t enjoy it so much anymore.

While he studies piano at the conservatory and other schools he starts composing in 1946. From 1952 on he goes to Darmstadt where his works are performed as well as in Paris and Köln « Musik der Zeit ». In 1958 he enters the Groupe de Musique Concrète where he stays until 1966. Creates with Pierre Schaeffer the Groupe de Recherche Musicale (1958-59); teaching activities, series of broadcasts on Musique Concrète, artistic and research direction of a small ensemble whose conductor is Konstantin Simonovich ; Sound recordings, illustration and co production of a TV-series  « Chaque Pays fête son Grand Homme » (1965). 1964-65 he teaches at the Rheinische Musikschule, Köln. He produces in 1965 and 1966 with Gérard Patris a TV series  « Les Grandes Répétitions » (Olivier Messiaen, Edgar Varèse, Karlheinz Stockhausen, Hermann Scherchen, Cecil Taylor).

In 1966 he teaches experimental music in Stockholm. Invited by the DAAD he spends the year 1967 in Berlin. Back in France he is in charge as artistic director of the Maison de la Culture d’ Amiens until 1969. In 1972 he builds up his studio « Billig », a modest electro acoustic workshop. He creates in 1982 the association ” La Muse en Circuit », a studio for electro acoustic composition and radio art which he leaves in 1994.

In 1995 a Ferrari season « Parcours Confus » is organized throughout Holland. He builds up in 1996 his own home studio, which he calls Atelier post-billig.  In 1997 conference and concert tour in California before he visits in 1998 the American southwest as an itinerant sound hunter and composes a radio series « Far-West News » for the Dutch Radio NPS.

In 2001, retrospective of all his electro acoustic compositions as well as his radio art pieces organized by the Futura festival, Crest in France.

He travels again in the United States for a concert tour in 2001 and in 2002 Tokyo invites him for a concert series. Also in 2003 he is invited again to Tokyo, with among many of his other pieces “Paris-Tokyo-Paris” commissioned by the Ensemble New Generation, then to Marseille as well as to Switzerland, La Chaux de Fonds, each time for a retrospective of his works during a week.

In 2004 the ensemble Ars Nova organizes a Ferrari-retrospective during a week of his electro acoustic, solo and orchestra works with the city of Poitiers and “one week with works by Luc Ferrari, an out of line composer who cannot be categorized, ” within the Lille 2004-festival « AUDIOFRAMES, paysages sonores ». One more week with Ferrari’s compositions for ensembles, electro acoustic works, as well as his audio-visual installation “Cycle des souvenirs” in November 2004, organized by the NOVELUM festival of Toulouse.

In 1972, he received Karl Sczuka Award for his radio piece Portrait-Spiel, (Production Südwestfunk, Baden-Baden). For his composition Et si tout entière maintenant, Luc Ferrari was awarded with the Prix Italia in 1987, again the Karl Sczuka Award in 1988 for his radio art Je me suis perdu ou Labyrinthe Portrait. In 1989 Grand National Award from the French Culture Ministry, in 1990 the Koussevitzky Foundation Award for his symphonic piece Histoire du plaisir et de la désolation and, in 1991 again the Prix Italia for his radio art L’Escalier des aveugles. 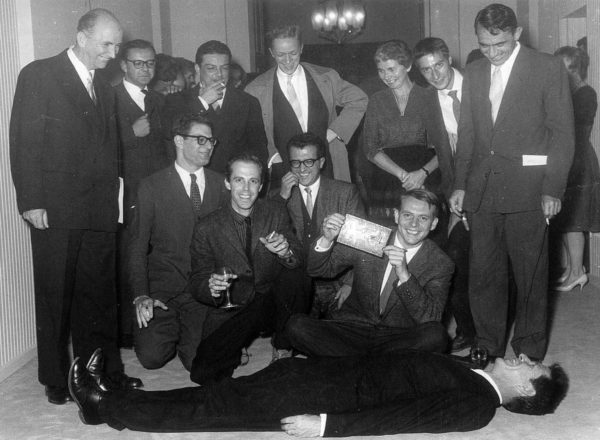 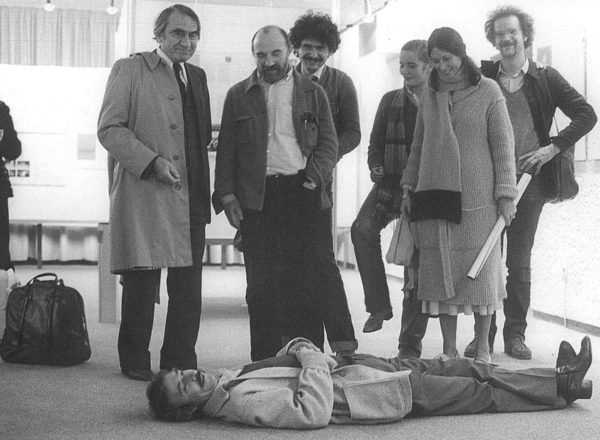 Series of programs on Musique Concrète.

In charge with research on new instruments;

Artistic director of an instrumental ensemble conducted by Konstantin Simonovic.

Exercices in improvisation on schedules.

Leading a collective composition for tape and orchestra with the participation of all composers of the Groupe de Recherche Musicale.

Lecturing on composition at the Rheinische Musikschule, Köln (Germany).

Invited by the Ford Foundation and DAAD, for one year to Berlin.

In charge of the Music Department at the Maison de la Culture d’Amiens.

Prix Italia for his symphonic tale Et si tout entière maintenant, made within the project of the multimedia-operation Brise-Glace.

Retrospective at the Manca Festival in Nice.

Invited by the electronic music studio of WDR, Köln.

On April 21st, retires from his responsibilities as president of La Muse en Circuit.

Parcours confus (retrospective) in Groningen, and  concert-tour in the Netherlands.

Builds his own home-studio named post-billig.

Undertakes the series of exploitation of the concepts which starts a new overall creativity – installations, work with experimental DJ, work on the improvisation, several important instrumental works, hörspiele, pieces for memorized sounds, etc

– The festival FUTURA, 2001 at Crest, where all his electroacoustics pieces since 1958 are performed.

– A multiform retrospective at La Chaux-de-Fonds, Switzerland, in May.

– January: one week of residence and monographic festival in Poitiersinitiated by Ars Nova in coproduction with the Theatre National Scene de Poitiers and La Muse en Circuit

– October 7-16 Lille/Courtrai, within the program of the Festival “AUDIOFRAMES, sound landscapes” Lille 2004 “one week with the music of Luc Ferrari”, produced by Ars Nova, in coproduction with La Muse en Circuit

– November.  During one week : concerts and installation dedicated to Luc Ferrari by the festival NOVELUM in Toulouse and the GMEA, Albi

On August 22, Luc Ferrari passes away in Arezzo, Tuscany.